This article describes things which are yet TODO to get the entire server architecture running on NoFlo (and in Flowhub), problems related to them and potential solutions. 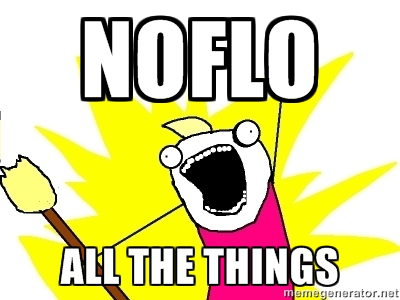 By default there is no isolation between IPs belonging to different user requests in NoFlo networks.

Express does its job conventionally, while request handlers instantiate NoFlo networks on demand.

Use the outmost (first in, last out) NoFlo group packet as request identifier. The entire app is a NoFlo graph, requests are born in noflo-xpress components and tagged with UUIDs, then all downstream components need to handle the outmost group carefully to synchronize data belonging to the same request.

Use cases for groups

Summarizing here what groups have been (reasonably) used for so far in NoFlo:

Most of component libraries were written in NoFlo 0.3 and 0.4 days. Most of them disrespect groups and some of them even have synchronization bugs (e.g. core/Kick is race-prone in some cases).

Our original plan about it was to run a campaign porting all the libraries to 0.5 and using WirePattern when necessary.

My proposal consists of the following:

Application architecture is similar to Solution 2, but implementation is different. Instead of using outmost groups, add a concept of optional “request identifiers” or “context tokens” to NoFlo itself. Once a context token is attached to a substream, it sticks to each of its IP. Every component isolates data (input, output and internal state) using context tokens as scope keys and forwards context information downstream automatically. By default no context keys are used, so all data is in the same scope just like they didn’t exist. Context tokens are only used in applications which require request isolation.

Footnote: contexts are mentioned in Matt Carkci’s Dataflow book, so this idea is not just crazy, it’s known to work.

Correct error tracking is tricky in a divergent-convergent graph because an error may happen at any node while other parts of the request may be hanging in other parts of the graph. They have to be pulled together somehow and forwarded back to the client properly.

To make things more complicated, there are different kinds of errors which need to be handled differently:

Handling these errors is most likely out of scope of NoFlo itself, but is rather a matter of architecture patterns.

J. Paul Morrison suggests using “string of pearls” FBP pattern in all applications dealing with requests. In this pattern, all the data for the request is collected within a single substream. The substream floats from one pearl in the string to another (just like on a pipeline). Each pearl on a string may pass the substream to its side processes (e.g. to load missing data, etc.) before forwarding it to the next pearl. Side processes return substreams back to pearls. At the same moment of time the request (and all the data associated with it) belongs to a single process, so if an error occurs, the current pearl just finishes the request without having to gather it from a branchy graph.

This pattern is very similar to “String of pearls” but allows a certain level of divergence-convergence to do parallel processing.

It introduces Request processors - a special type of processes which own the requests, scatter data to subgraphs and gather them back for a response.

Request processors make up a “backbone” of the application. Similar to string of pearls, requests float down the backbone of processors. But when a processor needs some side work to be done for a request, it doesn’t pass it with all the data to a single side process, but rather holds the request and sends the data to its workers with request ID attached. The workers do their job and return the results (and/or errors) to their master. The master then gathers the results and decides either to pass the request to the next processor in the backbone, or to finish it with a response immediately.

OK, we are done with theory and fundamental problems. All the rest is just http://programming-motherfucker.com